An earlier video production and editing system for Windows from NewTek, Inc., San Antonio, TX (www.newtek.com). Video Toaster (VT) was introduced in 1990 for Commodore's Amiga computer. Revolutionary at the time for the desktop video market, VT included hardware and software that provided digital effects, character generation and 3D animation. It also controlled professional analog tape decks, and its USD $5,000 price tag made it the most affordable broadcast-quality video system on the market.

After Commodore went out of business in the mid-1990s, a Windows version of VT was released in 1999 that supported uncompressed D1 digital video. In 2003, a greatly enhanced VT[3] version was introduced that continued the tradition of providing a professional video production environment at a fraction of the cost of mainstream editing systems. The last version (VT[5]) came out in 2007 but was discontinued in 2010. It was also used in NewTek's TriCaster portable production system until 2012. See video/TV history.

NewTek chose the Amiga for its advanced graphics in the early 1990s. The monitor on the right displayed the videotape, and VT software provided the controls. Analog signals from tape were converted to digital, edited in the computer and converted back to analog to a second tape deck. (Image courtesy of NewTek, Inc.) 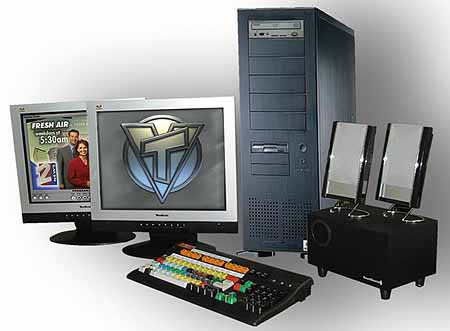 This is an earlier Windows-based VT system. For under USD $10,000, Varto Technologies combined VT with several CPU options and a specialized keyboard. This was equivalent to high-end editing systems costing 10 times as much. (Image courtesy of Varto Technologies, www.vartotechnologies.com)