(Unified Extensible Firmware Interface) A set of routines residing in firmware that boots the operating system and sets up the hardware in an x86-based PC. Governed by the UEFI Forum, UEFI evolved from Intel's EFI interface, and PCs began shipping with UEFI in the mid-2000s. Designed to replace the BIOS startup system, UEFI is compatible with older BIOS-based machines, and Windows, Mac and Linux support most of UEFI's features.

Microsoft support began with the 64-bit versions of Windows Vista and Windows Server 2008. Windows 8 was the first to use secure boot, which prevents malware from infecting the startup code (see secure boot).

UE Means Unified and Extensible
UEFI resides in flash memory on the motherboard, storage drive or network drive. Unified means any platform can be supported by recompiling the boot code, and extensible means functions can be added and enhanced.

A Lower-Level Operating System
Residing between the computer's startup firmware and the OS, UEFI performs diagnostics, authentication and encryption. "UEFI BIOS" is often displayed at startup because people are familiar with the meaning of BIOS and still refer to UEFI as the BIOS. See BIOS. 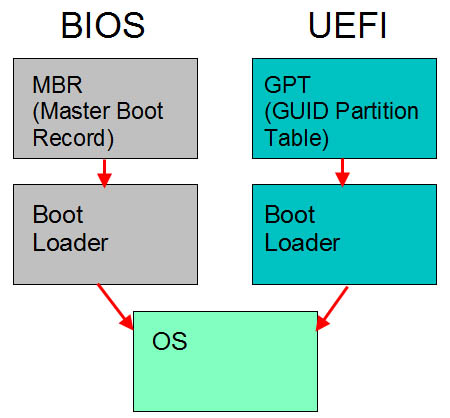 The BIOS master boot record (MBR) and the UEFI GUID partition table (GPT) store the size of the partitions on the storage drive. Whereas MBR supports partitions up to 2.2TB, GPT partitions can be as large as 18 exabytes. See MBR and GPT.