A program that appears legitimate but performs some illicit activity when run. It may be used to locate password information or make the system more vulnerable to future entry or simply destroy the user's stored software and data. A Trojan is similar to a virus, except that it does not replicate itself. Often sneaking in attached to a free game or other supposedly worthwhile utility, the Trojan remains in the computer doing damage or allowing someone from a remote location to take control. See Trojan dropper, wiretap Trojan, rootkit, RAT, Back Orifice, NetBus, PrettyPark, Talking Trojan, virus and information warfare.

The Trojan Horse
The term comes from Greek mythology, in which the Greeks battled the Trojans (people of Troy) in the 12th century BC. After years of being unable to break into the fortified city, the Greeks built a wooden horse, filled it with soldiers and pretended to sail away. After the Trojans brought the horse into the city, the Greek soldiers crept out at night, opened the gates of Troy to the returning soldiers, and Troy was destroyed. 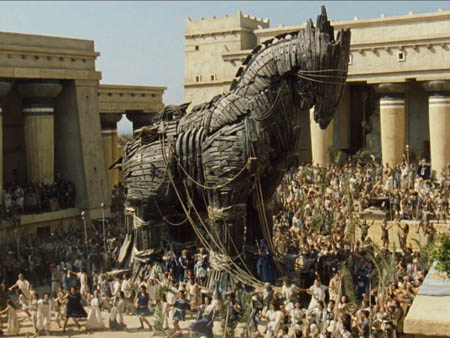 This is a scene from the 2004 movie "Troy," starring Brad Pitt, Eric Bana and Orlando Bloom. The movie was a huge success. (Image courtesy of Radiant Productions and Plan B Entertainment.)