(1) A framework for writing Web-based applications in Java from the Apache Jakarta Project. See Jakarta.

(2) A holographic storage medium from InPhase Technologies, Longmont, CO, designed for archiving data and video. In 2000, InPhase was spun off from Lucent Technologies, and production began for the Tapestry optical cartridge in 2010. However, InPhase went bankrupt in 2011, and Akonia Holographics acquired its assets in 2012. Apple acquired Akonia in 2018 for its optical expertise.

A Disc That Didn't Spin Continuously
Containing a photo polymer recording layer in the middle, the single platter was divided into thousands of optical "books" roughly one cubic millimeter in size. For reading and writing, the disc was rotated to the appropriate book, which held 330 "binary holograms" each containing 1.4 million bits in three dimensions. Each hologram was recorded with one flash of a blue laser, and the amazing thing about the technology is that every digital hologram pattern fully occupied the same physical space as the other holograms in the book. For more details, see holographic storage. 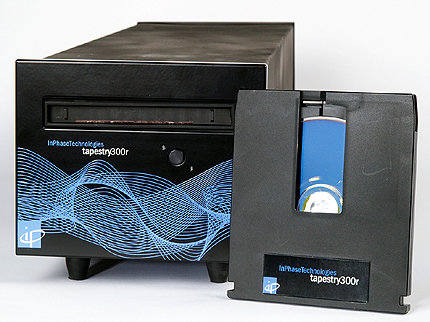 In 2010, these 300GB write-once drives were the only commercial holographic storage product. Tapestry's roadmap called for 1.6TB drives, as well as rewritable discs. (Images courtesy of InPhase Technologies.)