(Texas Instruments, Inc., Dallas, TX, www.ti.com) A leading semiconductor manufacturer founded in 1930 as Geophysical Service, an independent contractor specializing in petroleum exploration using sound waves (reflection seismograph method). In 1938, it spun off Geophysical Services, Inc. a Delaware subsidiary to do explorations for others. The parent company was later renamed Coronado Corporation, which ultimately dissolved in 1945.

In 1941, GSI was purchased by three employees and one of the original founders. The next day, the Japanese bombed Pearl Harbor, and the company found itself making equipment that would find enemy submarines, not just oil.

In 1951, GSI's name was changed to Texas Instruments, and soon after began making transistors via a licensing arrangement with Western Electric. In 1954, TI pioneered the first commercial production of transistors made from silicon, and in that same year, introduced the first pocket-sized transistor radio.

In 1958, TI's Jack Kilby demonstrated the first integrated circuit (IC), which incorporated several transistors on a single chip. Three years later, it demonstrated a working computer using ICs that were six cubic inches in size and weighed only 10 ounces. TI produced a complete computer on a chip (microcontroller) in 1971.

In the early 1980s, TI made a large number of low-priced 99/4a home computers. It later introduced desktop PCs, but then discontinued them. A line of notebook PCs was offered for several years, but this mobile computing part of the business was sold to the Acer Group in 1997.

As the first to commercialize the silicon transistor, pocket radio, integrated circuit, handheld calculator, single-chip computer and the LISP chip, TI has a long history of contributions to the electronics and computer industry.

In 1954, TI pioneered the commercialization of the silicon transistor. (Image courtesy of Texas Instruments, Inc.)

In 1958, TI built the first integrated circuit on a bar of germanium. It contained two transistors. This was the beginning of today's commonplace multi-million transistor chip. (Image courtesy of Texas Instruments, Inc.)

In 1967, TI introduced this handheld calculator. People were as excited to use this machine as they were when portable computers came on the scene a decade and a half later. (Image courtesy of Texas Instruments, Inc.) 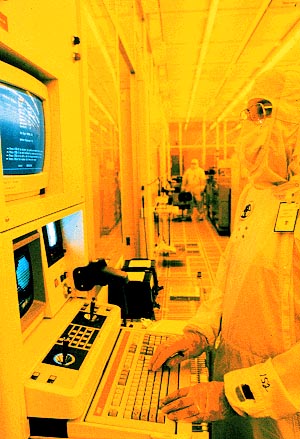 These pictures were taken inside TI's semiconductor fabrication plants. All workers don "bunny suits" which keep them from contaminating the delicate chip-making process. (Images courtesy of Texas Instruments, Inc.)