Microsoft's first all-in-one Windows PC. Introduced in 2016 and designed for professional architects and designers, the Surface Studio features a 28" touchscreen that folds down to become a drawing canvas. With initial models offering NVIDIA graphics, a large number of ports and up to 32GB of RAM and 2TB of hybrid storage, the Studio is a large drawing tablet for graphics development while also serving as a business PC. See Surface versions.

Surface Studio 2 and 2+
In 2018, the second-generation Studio added a USB Type C port and dropped the Mini DisplayPort. The Studio 2+ in 2022 increased CPU and GPU performance. 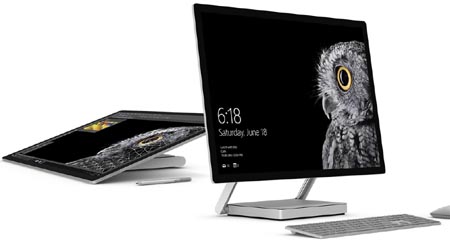 This is the first all-in-one that was designed to be a desktop computer and drawing tablet. (Image courtesy of Microsoft Corporation.) 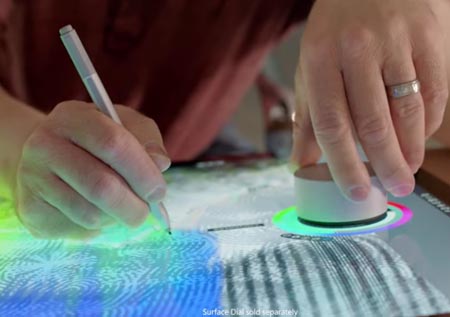 The optional Dial is placed on the screen and rotated to display menu choices. Providing haptic feedback (vibrations), the Dial also works with Office applications. In this example, it is used to change colors with one hand while the other is drawing. (Image courtesy of Microsoft Corporation.)