A virtual world on the Internet from Linden Research, Inc., San Francisco, CA (www.lindenlab.com), in which "residents" create an identity, meet people, buy land and build their own environment or purchase an existing one. It is a "massively multiplayer online role playing game" (MMORPG), but one that offers users total freedom to create and interact as if they were living another life. Playing the game requires a client download for Windows, Mac or Linux.

Launched in 2003 by Philip Rosedale, alias Philip Linden in Second Life, first-time residents make up a first name, choose a last name from a list and choose a graphic identity (an avatar). The name cannot be changed, but the avatar can be. The Second Life world is a group of islands in the tropics. Using the keyboard, one can move around at will and even fly over them. You can instantly teleport from one location to another.

Linden Dollars
Land and objects are purchased from Linden Lab or other Second Lifers using Linden dollars. A small amount is given to first-time users, but additional Linden dollars must be purchased monthly to acquire more. An entire island can even be purchased.

Virtual banks sprang up in Second Life that paid interest to Linden dollar depositors. However, some of them lost money by speculating in Second Life gambling and real estate ventures and actually caused a "virtual run on their bank." Since Linden dollars can be converted to real dollars, Second Lifers lost real money, and in early 2008, Second Life closed down the virtual banks, stating that only real chartered banks could offer banking services.

User Customization
Users can thoroughly customize their avatars with Second Life tools, and they can also be created offline and uploaded. Objects can be infused with the user's own images as well as programming code in the Linden Scripting Language. All sorts of Second Life environments have been created, from pure fantasy to ultra-futuristic to venues resembling a shopping mall.

The Real World - Simulated
There are countless Second Life cultures and subcultures organized around arts, sports, games and other areas. Groups can be formed that simulate mini-companies and mini-communities. Even real companies, such as Coca-Cola and Adidas, participate in Second Life as a marketing venue. Numerous universities, including Harvard, Princeton and Vassar, offer online classes. Religious organizations hold meetings, and starting with the Maldives and Sweden, countries have created virtual embassies.

People find partners, have virtual sex and even get married in Second Life. In other words, Second Life is the "virtual real world." For an engaging experience, visit www.secondlife.com. See MMORPG. 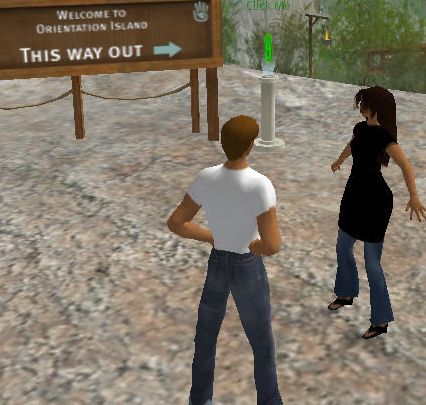 The person in the white shirt just signed up and is feeling his way around Second Life. Whenever you see another person, you can click on his or her avatar and try to start a conversation. Newcomers begin at Orientation Island, and one can actually sense the uneasiness of other newbies who just arrived moments ago. Sometimes they will answer your message; sometimes not. Depending on the name you chose and how forward you are, people will make judgments in the virtual world as they do in the real world.