(Power Over Ethernet) Distributing power over an Ethernet network. Because the power and signal are on the same cable, PoE enables remote network devices such as ceiling-mounted access points, surveillance cameras and LED lighting to be installed far away from AC power sources. See PoE lighting and PoE switch.

A PoE switch creates a PoE network, which supports both PoE and regular non-Poe devices. With adapters, PoE devices can be added to an existing Ethernet network (see illustrations below). Using at least Cat 5 cable, electricity is transmitted over unused wires in eight-wire cables and over signal wires in four-wire cables. See Ethernet, LTPoE++, PoC and network camera.

Active vs. Passive PoE
Active PoE ports comply with IEEE standards and sense the power requirements of the target device. If older devices are not compliant, no current is delivered. In contrast, passive PoE switches send 24 volts without checking, forcing technicians to know the electrical requirements of the units they are installing. 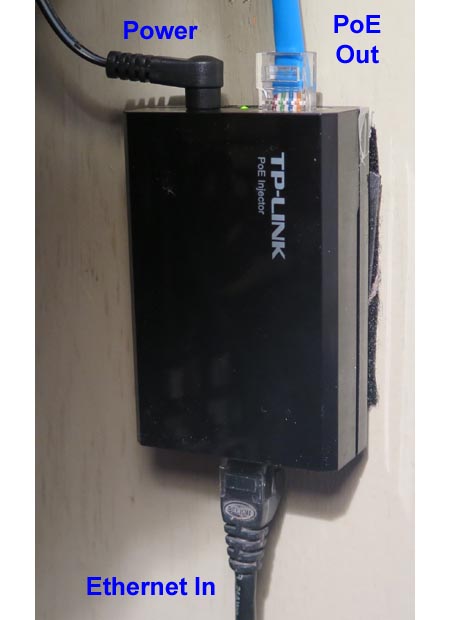 A PoE access point or camera is easily added to a regular Ethernet network with an injector, also called an "adapter."

This 8-port PoE switch from Omnitron Systems is a far cry from the common variety. It supports 10 Gigabit Ethernet as well as optical fibers (two SFP+ transceivers plugged into 10 Gbe ports), and it accepts 12 to 57 volts of DC power (top). The DIP switches are used to configure the device's many options. See SFP.