(PC JunioR) IBM's first personal computer designed especially for the home user. Introduced in 1983, two years after the very successful IBM PC, the PCjr included a wireless chiclet keyboard that was not suitable for touch typing. Instead of a plug-in graphics card, the graphics circuit was on the motherboard, a feature that made the machine less capable at that time but decades later would be the standard in all desktop computers. The PCjr did not run all the programs that the full-size IBM PC supported. The machine received mediocre reviews and was discontinued two years later, although IBM did eventually add a better keyboard. See chiclet keyboard. 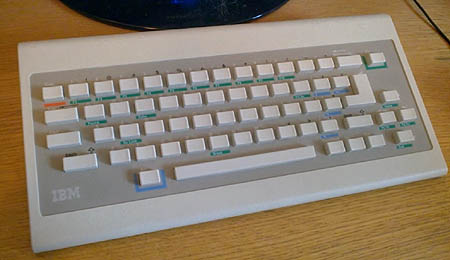 The keyboard was a major difference between the PCjr and IBM PC. Not only were the chiclet keys different, but the keyboard was wireless and connected via infrared line of sight to the computer. (Image courtesy of Thomas Ran, Chyrosran22 Keyboard Reviews on YouTube.)