(2) (Personal Computer) Any laptop or desktop computer such as a Windows, Mac or Linux machine.

(3) (Personal Computer) In contrast to the more generic definition above, a PC generally refers to an x86-based desktop or laptop computer, the great majority of which run Windows. The PC is the world's largest computer base with more than a billion connected to the Internet and more than a hundred million sold each year. PCs are available from large vendors such as HP, Lenovo, Dell, Asus and Acer, as well as countless small dealers who assemble them from standard parts. In addition, many people build their own (see building a PC).

PC Clients and Servers
The term PC typically refers to the user's desktop or laptop computer, which is the "client" machine. However, millions of x86-based machines are used as servers, running under Windows, Linux or Unix. Servers can be fully equipped like desktop PCs or mounted in datacenter racks without individual monitors. See blade server, x86-based system, rack mounted, client and server.

The IBM PC
IBM launched the PC in 1981 and exited the business in 2004, selling its PC division to China-based Lenovo. Immediately after the original launch, competitors began to create clones, and except for Compaq, most attempts failed until the mid-1980s when the PC's startup code (the BIOS) was successfully copied. Vendors purchased the BIOS from several companies, and the PC industry began to flourish. See IBM PC and BIOS. 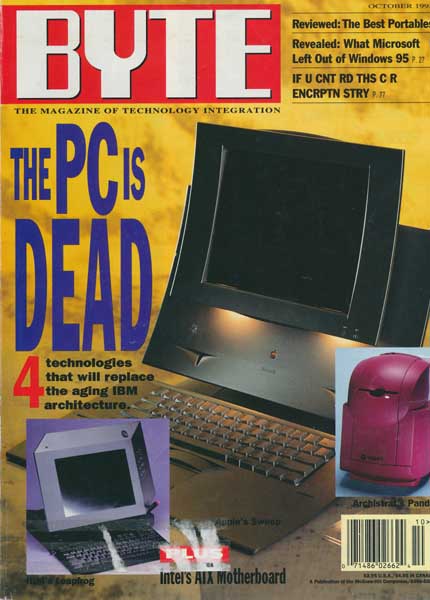 The death knell for PCs was sounded long ago; witness this 1997 magazine cover. However, no mobile device comes close to a large screen and responsive keyboard when hours of work and typing are required.