Client virtualization software from Oracle for desktop computers. Oracle VM VirtualBox runs in Windows, Mac, Linux and Solaris computers and is used to host these same operating systems and others as guests. VirtualBox is free for personal use. It is also available for enterprises with a minimum of 100 users as a paid product with tech support. Initially created by Innotek GmbH in 2007, VirtualBox was acquired by Sun and then Oracle in 2008 and 2010 respectively. See client virtualization and virtual machine. 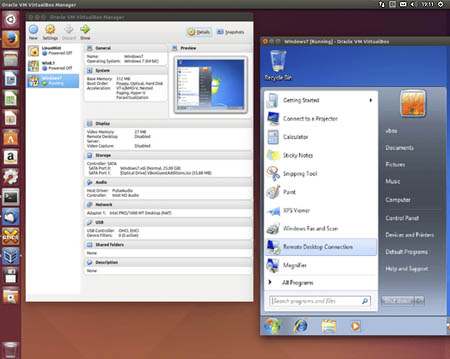 In this VirtualBox example, Windows 7 (right) is running as a guest OS in a Ubuntu Linux machine. (Image courtesy of Oracle, www.virtualbox.org)