An identity system for the Web that lets people use a single username and password to log in and authenticate themselves to OpenID-compliant websites. OpenID is a free system that is distributed across the Internet and maintained by numerous organizations, including major sites such as AOL and Yahoo!.

The Relying Party Queries the Identity Provider
A website that accepts OpenID is known as a "relying party," because it relies on an OpenID identity provider (IdP) for authentication. The OpenID username, called an "OpenID identifier," can be the URL of the provider with username appended, or it can be an XRI i-name if the relying party accepts it. I-names are human-friendly names, such as "=john.doe," that are linked to the OpenID provider, just like domain names are resolved by the DNS system into actual IP addresses on the Internet (see i-name).

When a user logs into an OpenID website, the script in the Web page redirects the browser to the identity provider. Using a password or other method, the identity provider attempts to authenticate the user and informs the website of its success or failure. For more information, visit www.openid.net. See single sign-on and identity metasystem.

This is a simplified example of the OpenID authentication sequence. What is not shown is that right after a user logs in, the relying party and identity provider typically share secret keys so that subsequent transactions are more secure. 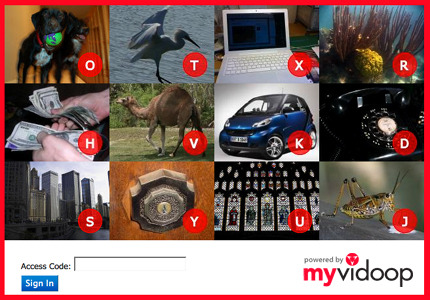 Instead of using a password that can be stolen, the myVidoop OpenID system (www.myvidoop.com) uses a different one each time. When creating a myVidoop account, users choose topics, and for authentication, myVidoop displays those topics in random order. In this example, if the topics were computers, money and cars, the password would be X-H-K for this session only. The next time, images and order will change.