The latest family of game consoles from Nintendo. Introduced in 2017 and superseding the Nintendo DS line, the device is called the Switch because it can be used three ways: handheld, tabletop and TV. In tabletop and TV modes, the game controls detach from the screen. In TV mode, whereby users view the games on their own TV sets, the Switch competes with the Xbox and PlayStation consoles.

Nintendo Switch OLED
In October 2021, Nintendo released the Switch with a 7" OLED screen, compared to the 6.2" Switch or 5.5" Switch Lite. Doubling the storage from 32GB to 64GB, the Switch OLED's screen is not only larger, but brighter. In addition, its sturdier kickstand keeps the unit more stationary in tabletop mode. See Nintendo DS, video game console, Xbox and PlayStation. 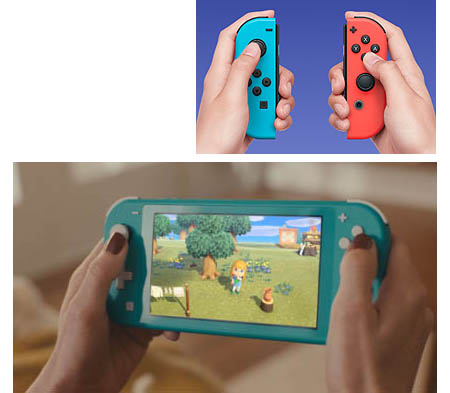 This image shows the 6.2" Switch in handheld mode. For tabletop mode using the Switch screen and TV mode using the TV screen, the game controls on both sides of the unit are detached. (Images courtesy of Nintendo.)