"The number of transistors and resistors on a chip doubles every 18 months," coined by Intel co-founder Gordon Moore regarding the pace of semiconductor technology. He said this in 1965 when there were approximately 60 devices on a chip. Proving Moore's law to be rather accurate, four decades later, Intel placed 1.7 billion transistors on its Itanium chip.

In 1975, Moore extended the 18 months to 24 months. He also said the cost of a semiconductor manufacturing plant doubles with each generation of microprocessor.

Reaching the Law of Physics
Using current manufacturing methods, we are reaching a limit to miniaturization. In 2021, 2 nanometer chips were prototyped by IBM, which is as small as possible without changes (see ultraviolet light). See laws and Koomey's law. 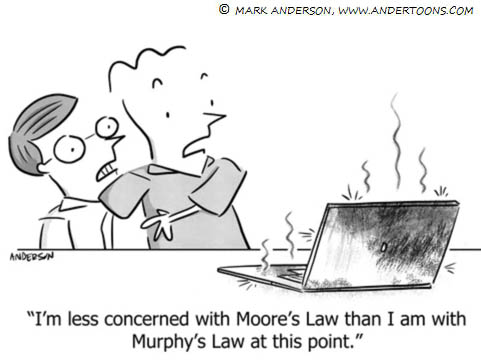