Microsoft's tablet. Introduced in 2012, the Surface was the first Microsoft tablet; however, starting in 2015, other Surface products debuted (see Surface versions).

Surface Pro - Windows 10 Pro
Running Windows 10 Pro, the 12" Surface Pro tablets are available with m3, i5 or i7 CPUs, RAM from 4 to 16GB and SSD storage from 128GB to 1TB. An optional dock plugs into the Surface for external monitors and peripherals when working in the home or office.

Surface Go and Windows 10 S
Surface tablets were always premium products, but in 2018, the Go debuted as an entry-level tablet with Windows 10 S. A one-time switch to full Windows is included (see Windows 10 S).

Not the First Hardware for Microsoft
Although famous for software, Microsoft has also offered and been very successful with mice, keyboards and the Xbox game console. However, for more than 30 years, Microsoft depended on third-party vendors for PC hardware until it introduced the Surface line in 2012. See PixelSense. 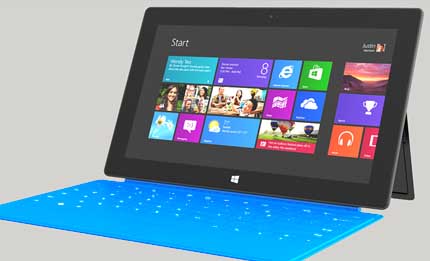 The optional screen cover/keyboard turns the Surface into a lightweight laptop. (Image courtesy of Microsoft Corporation.)