A hierarchy of hash values. Developed by computer scientist Ralph Merkle, the hashes are mathematical summaries of the given data.

In a blockchain such as Bitcoin, transaction data are recursively hashed twice using the SHA-256 cryptographic algorithm until only the Merkle root remains. See Verkle tree, blockchain, cryptographic hash function and crypto glossary. 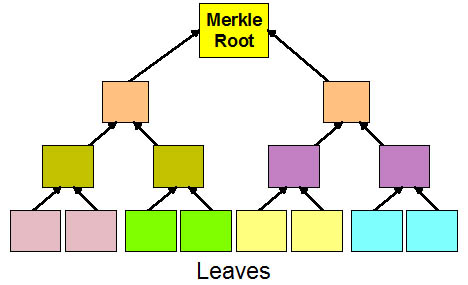 The Merkle root is the hash of all the transactions in the block (see below). Creating the root begins by hashing together each pair of leaves at the bottom of the tree. Moving up the tree, those hashes are hashed with other hashes until there is only one hash left at the top of the tree: the Merkle root.

The Merkle root is added to the blockchain header, and that header is hashed into the next block. See blockchain.