(Magnetoresistive RAM) Also known as "magnetic RAM," MRAM is a non-volatile memory that provides the byte addressability of RAM and the non-volatile attribute of flash memory. MRAM uses magnetic, thin film elements on a silicon substrate that is built on the same chip with the logic circuits. In contrast, DRAM, SRAM and flash memories cannot be embedded on the CPU chip.

Similar and Different
Like disks and tapes, MRAM is a magnetic technology. The 0s and 1s are the polarizations of the electrons within a ferromagnetic material. However, their operation is entirely different. MRAM uses a magnetic tunnel junction (MTJ), which comprises two magnetic layers separated by a dielectric (insulation) layer. The bit is read as the resistance in that junction.

Toggle MRAM and STT-MRAM
The two MRAM architectures are field-switched toggle MRAM and spin torque transfer MRAM (STT-MRAM). Toggle RAM has been around for more than a decade, while the newer STT-RAM uses a less complex architecture to achieve higher bit densities. See magnetoresistance, future memory chips and spintronics. 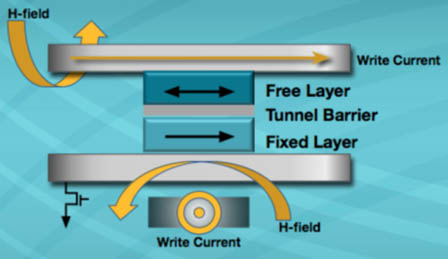 Magnetic fields (H fields) are created by the current passing through the two write lines, which are perpendicular to each other. The free layer, where the bit is stored, is switched by the direction of the current. When both the free and fixed layers have the same polarity, the junction offers low resistance, and the bit is 0. In opposite polarity, the bit is 1. (Image courtesy of Everspin Technologies Inc., www.everspin.com) 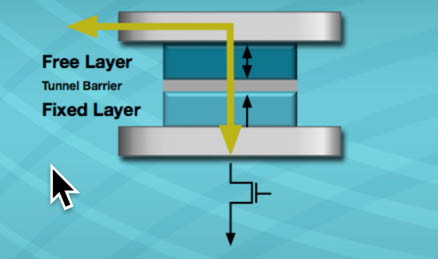 Like toggle MRAM above, the 0 or 1 is determined by the resistance between the magnetic orientation in the free and fixed layers. When both layers have the same polarity, the bit is a 0 (low resistance). In opposite polarity, the bit is 1. The yellow arrow is the polarizing current, which flows in one direction at a time. (Image courtesy of Everspin Technologies Inc., www.everspin.com)