A digital cable TV activation system from the OpenCable project of the CableLabs research consortium (www.cablelabs.com). Introduced in 2003 and sometimes called "Plug and Play TV," the CableCARD contains the customer's account information as well as the channel assignments and decryption algorithms used by the cable provider. The CableCARD is housed in a Type II PC Card module, and as of mid-2007, all new set-top boxes in the U.S. support CableCARDs.

No Set-top Box and More Accuracy
When a set-top box is used, depending on the type of box, TV set, connection and digital format, unnecessary video processing may take place in the chain from set-top box to TV. However, a CableCARD can be plugged directly into "Digital Cable Ready" TVs, DVRs, media servers and PCs, thus eliminating the set-top box and ensuring the most accurate decoding and scaling (see upconvert).

S-CARDs, M-CARDs and tru2way
A Single-Stream CableCARD (S-CARD) provides one tuner for viewing one channel, while the latest Multi-Stream CableCARD (M-CARD) supports up to six tuners for simultaneous watching, recording and picture-in-picture (PIP). Two-way interaction was added with CableCARD 2.0 for video-on-demand, and a "tru2way" logo certifies that the TV is a two-way CableCARD device. See DVR and set-top box. 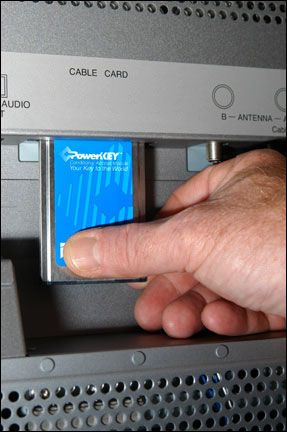 This Panasonic TV is CableCARD ready, and the card need only be inserted into the slot. (Image courtesy of Panasonic Consumer Electronics Company.)