(Logical Block Addressing) The way storage drives are accessed by a single sector number rather than by the earlier cylinder, head and sector (CHS) method. LBA was introduced in the early 1990s to support ATA/IDE drives as they reached 500MB, and Enhanced BIOSs in the PC translated CHS addressing into LBA. Subsequent ATA specifications raised support to 8.4GB, 128GB and 128PB (petabytes), the latter capacity we hope never to reach on our home PC in many lifetimes. See IDE and BIOS. 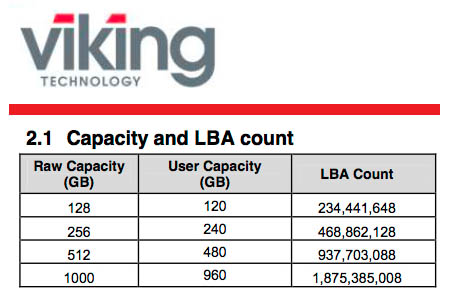 These are the LBA specs for various models of Viking Technology's NVMe SSDs. See NVMe.