A reversible 8-pin plug and socket for Apple mobile devices (the plug is inserted in either orientation). Lightning is at one end of the cable, and a USB Type A connector is at the other. Introduced in 2012 with the iPhone 5 and new iPods, Lightning superseded the 30-pin dock connector that dates back to 2001. Countless 30-pin cables and docks were adapted or updated.

No More Analog
The 8-pin Lightning is all digital, whereas the 30-pin interface included three analog audio lines. Although adapters let 30-pin cables plug into Lightning sockets, any device expecting analog signals would not work. For example, some car audio systems use the analog lines to transfer sound to the car's sound system. The final death knell to analog, starting with the iPhone 7, Apple eliminated the 3.5mm earphones jack, which has been an analog connector since the 1950s (see mini-phone connector). See Apple dock connector. 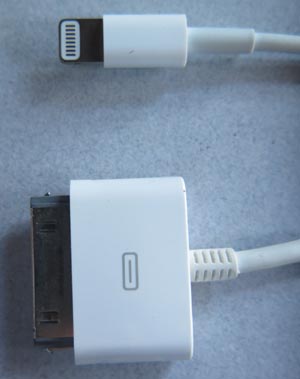 The 8-pin Lightning (top) takes up a lot less space than Apple's earlier 30-pin connector. In addition, there is no wrong way to insert the plug. See reversible plug.