An independent blockchain acting in concert with Bitcoin, Ethereum or other major chain, which retroactively became known as "Layer 1 chains" or "main chains." Layer 2 chains process new transactions faster while reducing the load on Layer 1 and typically taking lower fees.

Sidechains
Although sidechains and Layer 2 chains are often considered synonymous, their only similarity is that they function as auxiliary networks to a Layer 1 chain. A sidechain has its own consensus method for adding blocks, and like a Layer 1 chain, a sidechain requires a sufficient number of validators. See sidechain, consensus mechanism and Polygon blockchain.

Plasma Chains
Like sidechains, plasma chains have their own consensus method. Plasma provides a framework for building Layer 2 chains on Ethereum. At a fixed interval, a compressed representation of each block is committed to a smart contract on Ethereum.

State Channels (Payment Channels)
With state channels, crypto is deposited in a smart contract on Layer 1, and a connection is opened between two parties. Payments are made on Layer 2, and when completed, a ticket is signed on Layer 1. State channels can be bi-directional and also handle another party if channels have previously been opened. Bitcoin's Layer 2 Lightning chain uses state channels (see Lightning Network).

Rollup Chains
Rollup chains accumulate and settle transactions. At some interval, a summary of the transactions is "rolled up" and posted on the main Layer 1 chain. Optimistic Rollups assume people are honest but transactions can be disputed (see Optimism). Zero-Knowledge Rollups (ZK Rollups) provide cryptographic proof without divulging every detail (see zero-knowledge proof). 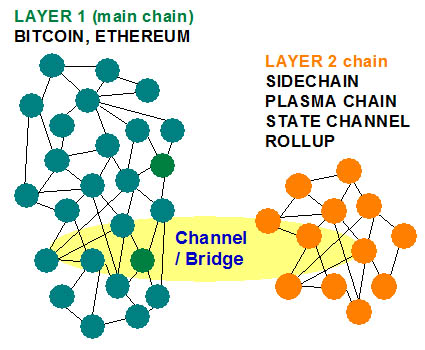 As Bitcoin and Ethereum became more popular, Layer 2 chains were developed to handle thousands of small-value transactions and store them as summaries on the main chain. Layer 2 chains also keep Layer 1 chains from growing too large and cumbersome.