(2) (Keyboard Video Mouse switch) A device used to connect a keyboard, mouse and monitor to two or more computers. KVM switches are deployed to control a group of servers, as well as to save desktop space when multiple computers are used by one user. Switches may have standard VGA, DVI, USB, mouse and keyboard sockets, while others use a custom combination cable that plugs into one socket on the switch.

KVM Over Longer Distances
To extend the distance up to several hundred feet between the user and computers, the keyboard, video and mouse plug into a "KVM extender," which is cabled to its counterpart unit at the computer. Some KVM switches support terminals at both ends of the connection, allowing local and remote access to all of the machines.

KVM devices can also control machines across the Internet or attached to the LAN. Software in the client PC converts keyboard, video and mouse signals into IP packets that are sent over the network. At the receiving end, the IP-based KVM switch is cabled to the computers. With an IP-to-KVM device, which converts IP packets to KVM signals, regular KVM switches can be used in an IP network. 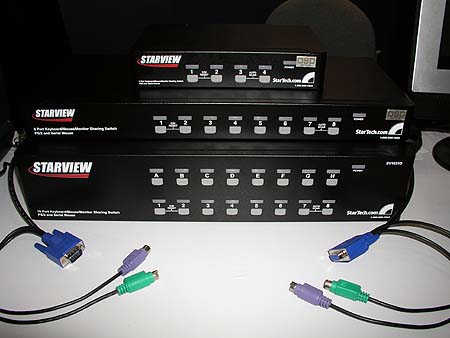