A digital camera used for surveillance. Network cameras are the successor to the analog closed-circuit TV (CCTV) systems that have been widely used for decades, but instead of a dedicated network, they use the local IP network, which also provides Internet access. Pioneered in 1996 by Axis Communications and also called an "IP camera," network cameras use standard IP protocols to transmit Motion JPEG, MPEG or H.264 video. See CCTV, ONVIF, MPEG and H.264.

Video (with or without audio) from all the cameras is recorded simultaneously on a dedicated network video recorder (NVR), which is a computer with video management software. Security services also provide cloud storage in lieu of or as backup for local recording. Most network cameras have motion sensors as well as built-in Web servers running Linux, which allows them to be adjusted and viewed from any Web browser.

Security cameras designed for the home with recording in the cloud may or may not be called network cameras (see connected camera).

One or Two Cables
Wi-Fi cameras use one power cable plugged into an AC outlet. Ethernet cameras require an additional cable that goes to the switch. However, power-over-Ethernet (PoE) cameras use a PoE switch for power (see PoE). See Webcam, PIR sensor and PTZ. 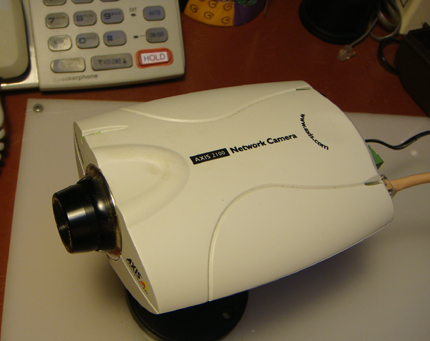 This earlier Axis Ethernet camera plugged into an Ethernet switch (beige wire) and drew power from an AC outlet (black wire). Wi-Fi and power-over-Ethernet (PoE) cameras use only one cable.