IBM's first computer. Introduced in 1952, the 701 was designed for scientific work and research, which led to the development of the FORTRAN programming language. Nineteen machines were built, a record volume for such a computer in that era. Its internal memory contained 2,048 36-bit words of electrostatic memory and 8,192 words of magnetic drum memory (see early memory). The 701 used magnetic tapes for storage and was one of the first machines to use plastic-based magnetic tapes rather than metal. See IBM 650 and IBM 1401. 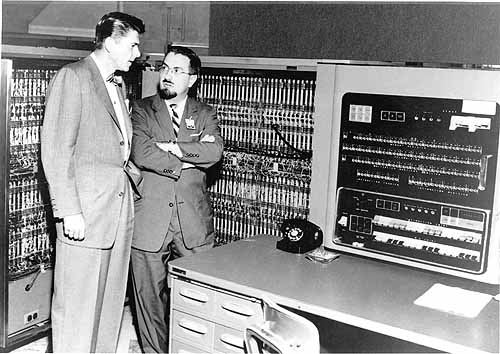 At General Electric's Aircraft Jet Engine Plant in Evendale, Ohio, this 1954 photo shows GE manager Herbert Grosch explaining the 701 to Ronald Reagan. Reagan was a TV personality for GE at the time. (Image courtesy of IBM.)