(HDMI Audio Return Channel) Starting with HDMI Version 1.4, the ARC channel lets a TV function as a home theater hub. The surround sound audio from the TV, Blu-ray player and other sources connected to the TV is directed back out via the HDMI ARC port to an ARC-enabled soundbar or A/V receiver connected to a sound system.

HDTVs Have Built-In Sources
In the past, the A/V receiver was always the central switching component for all the sources connected to a TV (cable, Blu-ray, media server, etc.). However, smart TVs have multiple sources built in such as Netflix and Hulu, and CableCARDs eliminate the cable box all together. In addition, the TV might also receive over-the-air signals from a roof antenna. The smart TV has thus become a central hub, and ARC allows it to send the audio from its internal and connected sources back out to a high-quality sound system instead of the TV's internal speakers. See home theater, smart TV, CableCARD, HDMI 1.4, soundbar, home theater in a box and A/V receiver. 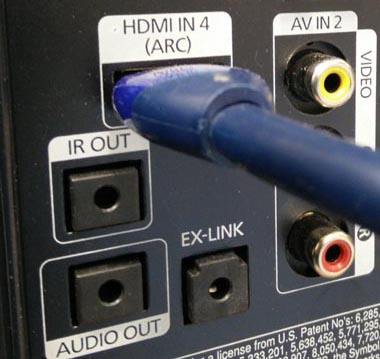 The ARC port is labeled "in," because it can also accept video from an A/V receiver while sending the audio back out.