Redirected from: Galaxy Note 10 Plus

A family of popular Android smartphones and tablets from Samsung. Introduced in 2011, the Note was Samsung's flagship phone featuring a stylus for drawing and handwriting. Based on the Wacom digitizer tablet, the "S Pen" can also be used for tapping icons and menus. The pen inserts into a slot in the phone. See Note Edge.

The S22 Ultra Became the Note in 2022
In 2021, the Galaxy S21 Ultra supported the S Pen but had no built-in slot to hold it. For people who use the pen, cases with a slot became immediately available. However, the S22 Ultra includes the pen and slot and is essentially the Galaxy Note going forward (see Galaxy S).

There Are Also Note Tablets
Starting in 2012, Samsung released tablets with a stylus under the Galaxy Note brand and screen size, such as Note 8.0, Note 10.1 and Note 12.2. Therefore, depending on model number, a Galaxy Note can be a smartphone or a tablet.

Note 20, 20 Ultra (August 2020)
Both models support 8K video plus all the 5G frequency bands in the U.S. as of 2020. Both models have triple cameras, including the same front camera. The Ultra has a 108MP wide-angle rear camera compared to 12MP for the Note 20. The Ultra has more camera settings such as hyperlapse and still shots from video. See hyperlapse.

Note 10, 10+ and 10+ 5G - (August 2019)
The previous Note family added its first 5G phone (Galaxy Note 10+ 5G). The fingerprint scanner is in the screen, and the headphones jack was eliminated. A triple-lens rear camer with 4K and HDR support is included.

Note 9 - (April 2018)
With a slimmer bezel, the screen is only a fraction larger than the Note 8. The battery jumped from 3,300 to 4,000 mAh (see ampere-hour), and internal storage doubled. The fingerprint sensor was moved below the camera module, correcting the awkward placement on the Note 8. The stylus was Bluetooth enabled for presentations and picture taking by remote control.

Note 7 - (April 2016) - Awful Flaw
The Note 7 superseded the Note 5 (there was no 6), but the 7 was a failure. Batteries would occasionally explode or burn while charging, and several airlines banned their use. Samsung initiated a global recall; however, after replacement units had problems, Samsung ceased production in October 2016. 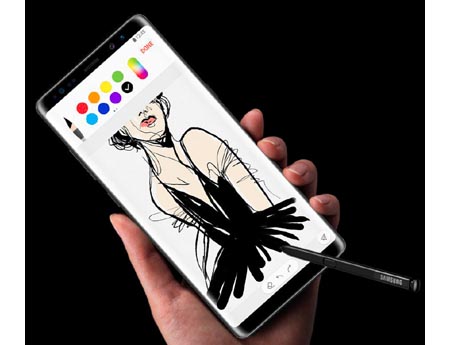 What sets the Note line apart is the S Pen, which is used to draw, write and annotate on the screen. (Image courtesy of Samsung Electronics Company, Ltd., www.samsung.com)

The large screens on early Notes and other Galaxy models quickly became popular and induced Apple to offer its first phablet-sized device in 2014 (see iPhone 6).