(2) A digital media hub from Amazon that streams audio and video from the Internet to any TV. Introduced in 2014, along with Netflix, Hulu Plus, Amazon's Instant Video and other content providers, the Amazon Fire TV debuted as a game console as well. Although the standard remote can be used for gaming, an optional Amazon game controller is available, and other Bluetooth gamepads can be paired to the unit. A downloadable Plex app accepts content streamed from any computer in the network that is also running Plex. Although Android based, Fire TV does not run the same general-purpose apps that can be downloaded into an Amazon Fire tablet (see Fire tablet).

Effective Voice Search
The Fire TV followed in the footsteps of the Apple TV, Google TV and Roku set-top boxes but was first to offer voice search. Instead of scrolling and clicking letters in a grid or typing on a minuscule keyboard on the remote, pressing the microphone button on the Fire's remote and speaking the name of the movie or actor returns a list of results. The voice search is primarily for movies and is not integrated into all the Fire's content. See Plex and digital media hub.

Like the Apple TV and Roku 3 hubs, the Fire TV is a small unit, often hidden in the home theater cabinet. In this example, the switch connects these three set-top boxes and an Oppo Blu-ray player to the home's main Ethernet switch, which connects to the wireless router. 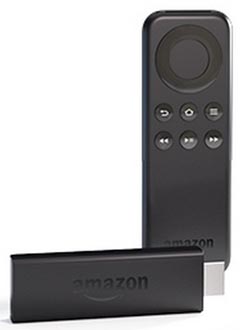 Introduced in 2014 and similar to Google's Chromecast, the Fire TV Stick plugs directly into an HDMI port. Less expensive and less powerful than the Fire TV set-top box (dual core vs. quad and 1GB vs. 2GB RAM), the Stick is Wi-Fi only, and the voice remote is optional. (Image courtesy of Amazon.com.)