(Directional Correlational DeInterlacing) An algorithm from Genesis Microchip's Faroudja division, San Jose, CA (www.meridian-audio.com/faroudja) that is used to deinterlace video content (convert from interlace to progressive scan). DCDi is known for its smooth interpolation of video content as it fills in the missing lines (see interlace). Used in Faroudja's own products, DCDi algorithms are also licensed to many other consumer electronics companies.

Many Processes Are Used
DCDi uses a number of techniques including film mode detection, which determines that the source was film and instantly switches between video and film deinterlacing modes. Bad edit detection looks ahead of the video stream for breaks in the 3:2 sequence caused by improper editing and compensates accordingly.

DCDi also performs cross-color suppression, which eliminates the rainbows that surround fine black and white detail such as a herringbone jacket because color has leaked in. The latter is caused by low-cost comb filters that separate composite video into component signals (Faroudja also makes a high-end comb filter for composite sources). See interlace, deinterlace and telecine. 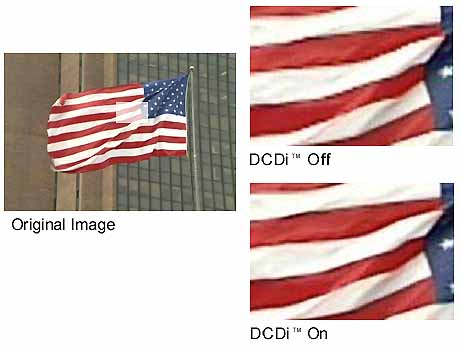 DCDi fills in the missing lines in interlaced video. It produces fewer jaggies in diagonal transitions than other methods by analyzing the changes in motion in both video fields. (Image courtesy of Home Theater and High Fidelity, www.hometheaterhifi.com)