A videophone from Facebook that was introduced in 2018. Communicating with other Portal or Facebook Messenger members, the camera follows the callers within a 140 degree periphery. The unit's two microphones in front and two in back filter out unwanted noise and help triangulate the caller's location. Portal also automatically zooms in and out (see Ken Burns effect), and Amazon's Alexa is also built in. In 2019, the Portal TV set-top box was added that lets people use their large-screen TV for Facebook video. See smart display and Facebook. 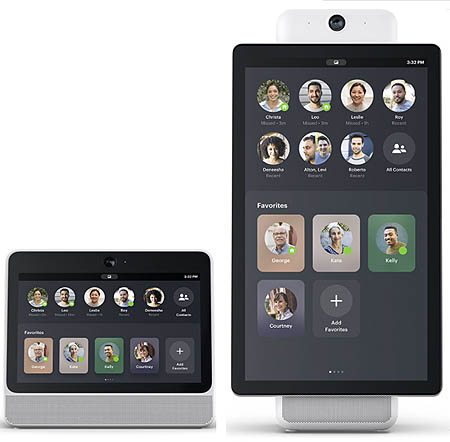 The Portal (left) has a 10.1" landscape screen, while the Portal+ has a rotatable 15.6" screen. A year after these models debuted, Portal TV and an 8" Mini version were introduced. (Image courtesy of Facebook, Inc., www.facebook.com)