(Electronic Delay Storage Automatic Calculator) Developed by Maurice Wilkes at Cambridge University in England and completed in 1949, it was one of the first stored program computers and one of the first to use binary digits. Its memory was initially 512 36-bit words of liquid mercury delay lines, and its input and output were provided by paper tape. The EDSAC could do about 700 additions per second and 200 multiplications per second. It was in routine use at the university until 1958. See delay line memory. 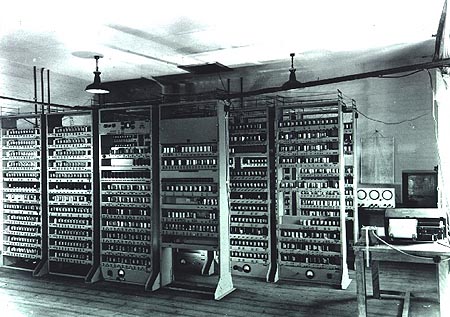 Using liquid mercury memory, the EDSAC could perform a mind-boggling 700 additions per second. It was one of the first computers to perform calculations in binary. (Image courtesy of Computer Laboratory, University of Cambridge,www.cl.cam.ac.uk)