A laptop computer that runs the Android operating system. Emerging in the 2014 time frame, Android laptops are the same as Android tablets, but with attached keyboards. See Android computer, Android PC and Android tablet.

Android vs. Chrome Laptops
Although both are Linux based, Google's Android and Chrome operating systems are independent of each other. There is speculation that the two platforms will be merged in some manner, but as of early 2014, Chrome computers and Android computers are not the same, and their respective applications are downloaded from different online app stores. See Chrome OS. 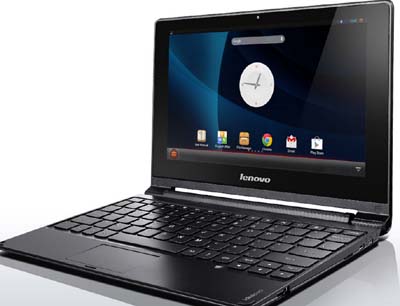 In late 2013, Lenovo debuted the A10 Android laptop in Europe. (Image courtesy of Lenovo, www.lenovo.com)