(2) (Digital Subscriber Line) A technology that increases the digital capacity of ordinary telephone lines (the local loops) into the home or office for Internet and TV service. Depending on the DSL version, speed is based on the distance between the customer and telco central office or telephone junction box.

DSL provides "always-on" operation. At the central office, DSL traffic is aggregated in a unit called the DSL Access Multiplexor (DSLAM) and forwarded to the appropriate ISP or data network. DSL arrived in the late 1990s with more version alphabet soup than most any other new transmission technology. See PPPoA and PPPoE.


The following DSL versions provide a faster speed from the Internet to the user than the query to the Internet. For example, a request to view a website is a tiny amount of data, but the returning Web pages and graphics are a huge amount of data by comparison.

Asymmetric DSL
Asymmetric DSL (ADSL) shares ordinary telephone lines by using higher frequencies than human speech. To eliminate interference, the first DSL deployments required a technician from the phone company to install a splitter that divided the line into separate DSL and phone lines. Subsequent splitterless versions (known as G.Lite, Universal ADSL and ADSL Lite) eliminated the support visit but require the user to plug filters into every phone outlet.

The higher frequencies of DSL have to be filtered out for regular telephones, answering and fax machines. 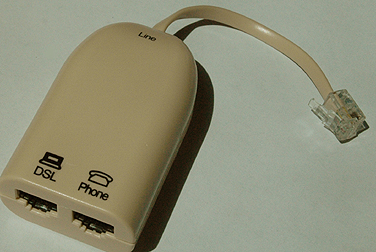 Low-pass DSL filters split the line between phone and DSL modem. When DSL is installed, every telephone and answering machine must plug into the filter.

RADSL (Rate Adaptive DSL)
RADSL is a version of ADSL that adjusts speeds based on signal quality. Many ADSL technologies are actually RADSL.


VDSL/VHDSL (Very High Bit Rate DSL)
VDSL is used as the final drop from a fiber optic junction point to nearby customers. VDSL lets an apartment or office complex obtain high-bandwidth services using their existing copper wires without having to replace them with optical fibers. Like ADSL, VDSL can share the line with the telephone.

The following DSL versions provide the same speed both up and down.


SDSL (Symmetric DSL)
SDSL is an HDSL variation that is rate adaptive, uses one cable pair and is offered in speeds from 144 Kbps to 1.5 Mbps. Like HDSL, SDSL does not share lines with analog phones.


IDSL (ISDN DSL)
IDSL is a slightly faster basic BRI ISDN service. It uses the 16 Kbps "D" channel for data rather than call setup to achieve 144 Kbps instead of 128 Kbps. It also offers the longest distance of 26,000 feet. Unlike standard ISDN, IDSL does not support analog phones, and signals are not switched through the telephone network. Since IDSL uses the same 2B1Q line coding as ISDN, ISDN customers can use existing BRI terminal adapters and routers. See ISDN.