An open source custom Android operating system that was designed to offer more flexibility than Google's stock Android. Introduced in 2009, a year after Android debuted, CyanogenMod added gesture recognition, camera enhancements, custom app permissions and various other tweaks, some of which were later incorporated by Google and major smartphone companies. See Android ROM.

CyanogenMod and Cyanogen OS
CyanogenMod was the community-driven version, and by 2015, there were more than 12 million downloads of this "custom ROM." Steve Kondik, whose forum handle was Cyanogen, created the OS and was founder and CTO of Cyanogen Inc., which offered the Cyanogen OS commercial version pre-installed on phones such as the OnePlus One. In 2016, Cyanogen Inc. closed, and the open source CyanogenMod version evolved into LineageOS (www.lineageos.org). 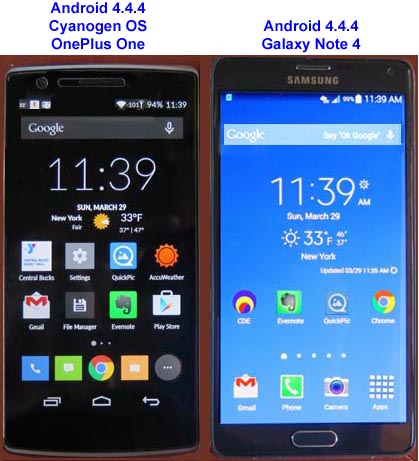 Side by side, there seems little difference between the OnePlus One and the Note 4. However, Cyanogen OS was more customizable, and like Google's Nexus line, had a limited number of apps from the phone vendor.