A streaming device from Google with built-in Wi-Fi. Chromecast streams content to the TV from Netflix, YouTube, Google Play and Spotify, as well as the Chrome browser via the Google Cast extension. The content playing on the user's phone, tablet or computer is said to be "cast" to the TV. Starting with the second generation Chromecast, wired Ethernet is supported with a separate adapter. Chromecast can also be linked to Google's home assistant to operate the TV by voice (see Google Home). See screen mirroring.

Introduced in 2013 at $35, the first batch sold out immediately. The second-generation model lets users watch video on the TV while listening to audio on headphones plugged into their mobile device. In addition, high-res music support (see 96/24) was added along with multi-room capability by plugging Chromecast units into two or more speaker systems.

Music Via Chromecast
Songs can also be cast to the TV's speakers via Google Play Music apps in Android and iOS devices. However, Google introduced Chromecast Audio in 2015 that works with any non-wireless powered speaker. See Chromecast Audio.

Chromecast vs. Android TV
The initial release of Chromecast offered Netflix and YouTube as the only third-party movie/video providers; however, more media sources were later added. Android TV, on the other hand, is Google's second-generation set-top box and smart TV platform, and it also runs regular Android apps. See Android TV, Nexus Player and HDMI dongle. 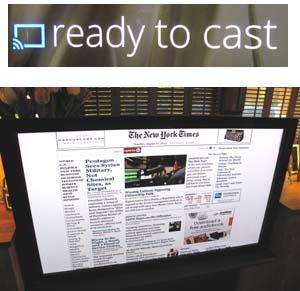 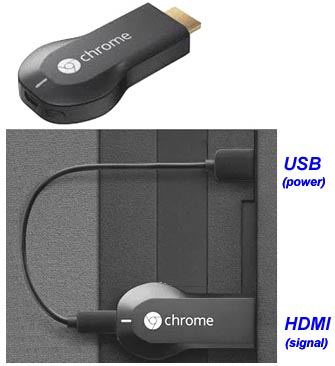 Power comes from a USB port, and this photo shows one next to the HDMI input, but the USB may not be so conveniently located (see image below). This is the first-generation Chromecast unit. (Image courtesy of Google Inc.) 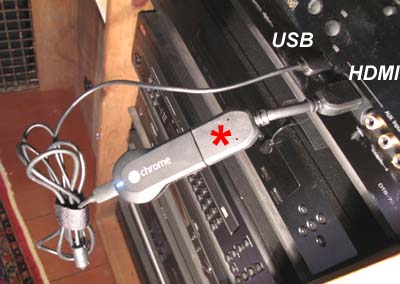 Not as elegant as the vendor photo above (real implementations rarely are), this Chromecast is plugged into the front HDMI and USB jacks of an A/V receiver. The Wi-Fi extender (red asterisk) improves reception. 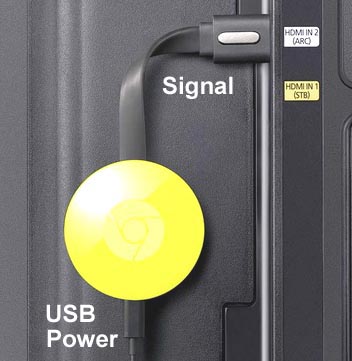 The second-generation model has improved Wi-Fi reception but also has an optional Ethernet adapter. Instead of colors, the slightly faster third-generation Chromecast is available in only black and white. (Image courtesy of Google.)