The Boolean logic gates AND, OR and NOT comprise transistors, which are on/off switches wired together. Gates have one or two inputs but only one output, and they are wired in patterns that make up electronic circuits.

In the following illustrations, the transistors are depicted as mechanical switches, although they are really semiconductor switches made of silicon (for more details, see transistor). In their normal state, transistors can be open (not conductive) or closed (conductive). When pulsed at their inputs, they change their state. To learn how gates work in a circuit, see Boolean logic.

In this AND example, both inputs have no pulses of electricity (both are 0). In order to trigger both transistors to close and allow the source current to flow to the output, both inputs must be pulsed. 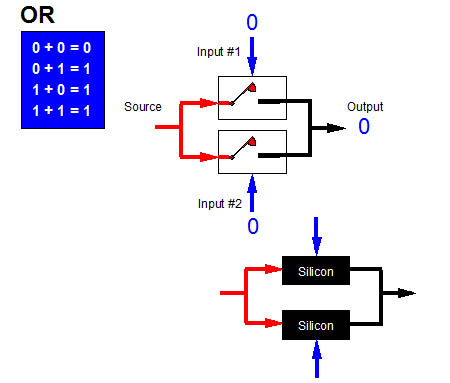 In this OR example, any of the two inputs will trigger their respective transistor to close, and the source current reaches the output side.

A NOT gate is conductive in its normal state. When pulsed, the transistor opens and impedes the current.