(2) A stand-alone unit that plays Blu-ray and DVD movie discs. It also plays music from CDs, and newer models have built-in Netflix support, as well as access to other streaming services. A "Blu-ray player" is an input source for a TV or home theater, whereas a "Blu-ray drive" is a peripheral device for a computer. See Blu-ray and DVD. 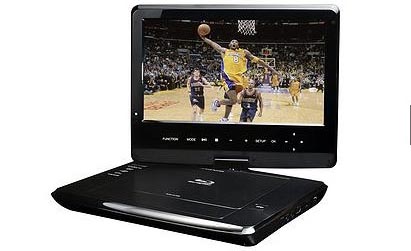 Portable Blu-ray players such as this Azend unit are self-contained viewers with screen and speakers. (Image courtesy of Azend Group Corporation, www.azendcorp.com)