The Canadian company in Waterloo, Ontario that pioneered email on the BlackBerry smartphone. Founded in 1984 as Research In Motion (RIM), the company renamed itself after its product line in 2013.

In the early 2000s, BlackBerrys were "the" smartphones in corporations. However, by the time a new and promising smartphone line was introduced in 2013, iPhones and Androids had captured the market. In late 2016, TCL Communications took over the brand and released several BlackBerry models using the Android operating system. In 2020, the BlackBerry-TCL arrangement ended. See BlackBerry Key.

BlackBerry Email Pioneered the Smartphone
In the 1980s and 1990s, RIM products were text-only pagers that used the Mobitex network. In 1995, two-way messaging was introduced. However, the big change occurred in 1999 when the BlackBerry pager became the first mobile device that synchronized with a company's email server (see BlackBerry Enterprise Server). See Mobitex.

In 2002, GSM voice and GPRS data were added in the model 5810, making it the first BlackBerry smartphone. Two years later, a million people were using them, and in 2009, with so many repeat users, the 50 millionth BlackBerry was sold.

Until the Storm came out in 2008, BlackBerrys had physical keyboards, which was their distinguishing feature. Using both thumbs, people learned to type quickly (see thumb culture). (Images courtesy of BlackBerry, www.blackberry.com) 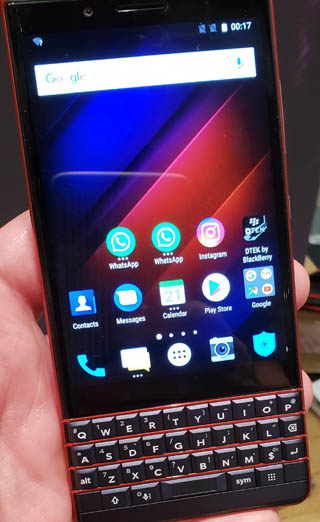