A user or organization on the blockchain that is the sender or recipient of funds. Addresses in a Bitcoin transaction are publicly visible in contrast to the private keys that generated them, which are kept secret. See Bitcoin transaction.

Pay to the Order Of
To send Bitcoin to someone, that person's public Bitcoin address is the equivalent of "Pay to the order of" on a bank check.

Pseudonymous; Not Anonymous
Although Bitcoin addresses do not identify the owner by name, they directly represent the owner. If a crypto wallet or exchange is hacked, it is possible to match a name to an address and thereby be able to identify all the owner's previous transactions and current balance (see block explorer). Because of this public visibility, users may choose to create many private keys, each of which generates a different public Bitcoin address.

Because of this lack of complete anonymity, there are other cryptocurrencies that feature privacy as their advantage over Bitcoin (see privacy crypto). In addition, there is a protocol that enables human-readable addresses (see FIO).

How the Bitcoin Address Is Generated
A user's private key generates a public key using elliptic curve multiplication. The public key is then converted into the Bitcoin address using two hash algorithms (SHA-256 and RIPEMD160) and one encoding method (Base58Check). The result is an address from 25 to 34 characters. See elliptic curve cryptography, HASH160, SHA and crypto glossary. 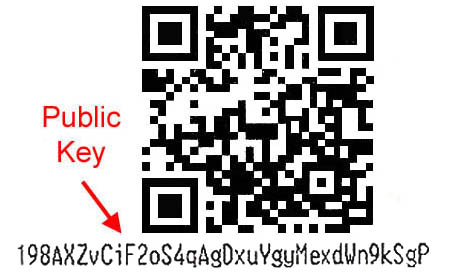 Bitcoin addresses begin with a 1 or 3, followed by up to 33 alphanumeric characters. To avoid confusion if the address has to be manually typed in, notice that there are no 0s or 1s and no capital "O" or lower case "L" letters in the body of the address. See Base58.