Betacam SP (Superior Performance) came out in 1986, increasing resolution from 300 to 340 lines and adding improvements to the tape and recorders. Using a larger cassette that increased time from 30 to 90 minutes, Betacam SP was widely used in professional applications until Digital Betacam took over in the late 1990s.

A Boon for Camera Operators
Although heavy by today's standards, the first Betacam camcorders were considerably lighter than the video cameras of the era. Betacam was a welcome breakthrough for cameramen shooting on location. 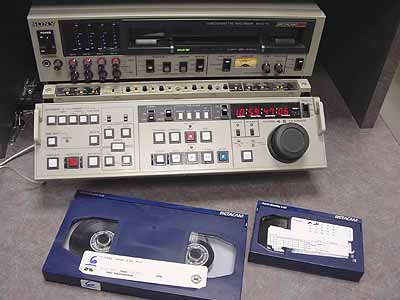 Betacam videotape recorders (VTRs) are not your ordinary home VCRs. Used in professional studios, they cost up to 100 times that of a consumer VHS machine. Betacam is the de facto broadcast videotape format worldwide, and cassettes come in small and large formats.