The BIZMAC was one of the first computers in the U.S. It was made by RCA, which was a natural candidate as it was already a vacuum tube supplier. In 1956, the first BIZMAC went to the Ordnance Tank-Automotive Command (OTAC) in Detroit to keep track of supplies for the U.S. Army. In today's dollars, its annual maintenance was $5 million. A few more commercial installations followed, but that same year IBM's 705 was much more advanced, and RCA's own 501 computer came out only two years later. BIZMAC was quickly obsoleted. 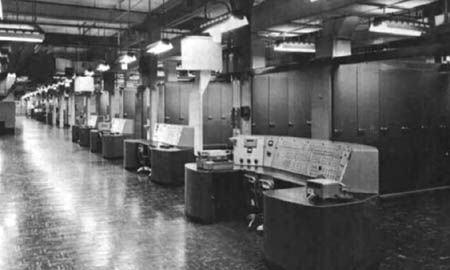 Twenty people operated the BIZMAC at OTAC, which comprised 270 cabinets, 182 tape drives, 30,000 tubes and took up 20,000 s.f. of floor space. The equivalent CPU power today fits on the head of a pin. (Image courtesy of U.S. National Archives and the Computer History Archives Project.)