The stylus designed for the iPad Pro. Introduced in 2015, the Apple Pencil communicates with the tablet via the screen and Bluetooth. Sensors in the tip detect force and tilt, and when drawing, pressing harder produces a bolder, darker stroke. Just like a tilted paintbrush would apply more paint to a real canvas, tilting the Pencil produces a wider, shaded line. The Pencil also has palm rejection, which means users can rest their hand on the screen for comfort while drawing. Other styli for the iPad do not support this feature. See iPad Pro. See also Surface Pen. 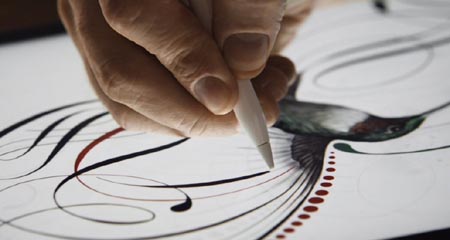 Designed for artists and people who just want to have fun, the Apple Pencil emulates a paintbrush while adding a lot more functionality. (Image courtesy of Apple Inc.)

The Pencil pairs with the iOS device by removing the cap and plugging it into the Lightning port. It can also be charged from a Lightning cable with a Lightning-to-Lightning adapter as in this example.