Apple's first computer. Several retail stores in Silicon Valley offered the Apple 1 in 1976, the same year Apple was founded by Steve Jobs and Steve Wozniak. Sold without a case, power supply or keyboard, the Apple 1 had 8KB of memory and a 1 MHz processor from MOS Technology. It is estimated that some 200 units were built, many by the hand of Steve Wozniak. A year after its introduction, the Apple II was introduced, which became an outstanding success. See Apple and Apple II.

Worth More Than Gold
Although approximately 60 Apple 1's are estimated to still exist, six are known to actually work, and three of them were auctioned within a year of each other. In June 2012, one went for $374,500 to an anonymous buyer at Sotheby's after fierce bidding between two people. In November 2012, Auction Team Breker in Cologne, Germany, which specializes in technical antiques, sold an Apple 1 for $640,000. In May 2013 another unit sold for $671,400, more than a thousand times the machine's original price of $666.66.

Not Really Junk!
In April 2015, an elderly woman dropped off an Apple 1 at the CleanBayArea e-waste recycling center in Milpitas, California without leaving her name. Along with other electronics, the Apple 1 was the property of her late husband. CleanBayArea promptly sold the unit for $200,000 and will pay her half the amount if she can ever be located. See e-waste. 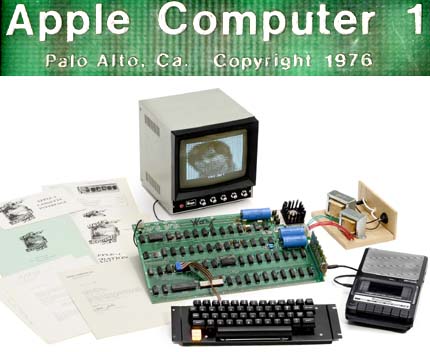 This is the unit auctioned in May 2013. Apple's copyright notice (top) is printed on the motherboard. (Image courtesy of AUCTION TEAM BREKER, Cologne, Germany, (c) 2013, www.breker.com)