Software for Windows or Mac that runs an Android application. Apps can be downloaded from Google Play and executed just as if the Windows PC or Mac were an Android tablet. Also called an "Android emulator," the term "emulator" is a misnomer. Android applications are based on Java and use a native Java interpreter (see Dalvik) written for x86-based Windows and x86-based Mac computers. See Android, Java and emulator. 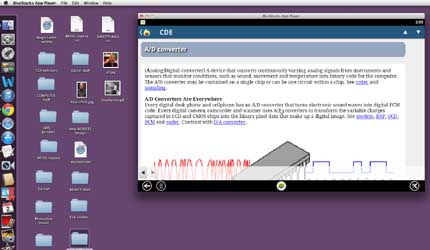 The BlueStacks App Player is running the Android version of this encyclopedia in a Mac. BlueStacks created native Dalvik interpreters for Windows and Mac x86-based machines. See Dalvik.