(AOL LLC., New York, NY, www.aol.com) An online service that offers Web browsing, email and a variety of information portals and Internet-based services. When dial-up Internet was king in the late 1990s, AOL became a major force with more than 30 million subscribers worldwide connecting via analog modems. Its integrated software was popular with first-time users, who were signing up in droves. However, as broadband cable and DSL took hold, AOL's dial-up base declined significantly. By 2011, AOL had roughly 10% of the dial-up customers at its high point.

AOL History
AOL was founded in 1985 as Quantum Computer Services by a handful of employees from the remains of Control Video Corporation (CVC), a company that sold Atari video games online. Quantum Computer offered games and other software to users with Commodore computers. In 1989, service was extended to the Mac and Apple II, and then to DOS users in 1991, when it changed its name to America Online (AOL). In 1995, the company acquired ANS, a network services provider, and two years later sold ANS to WorldCom in exchange for CompuServe's customer base, which WorldCom had recently acquired.

In early 2001, AOL merged with Time Warner to become the largest online information and entertainment conglomerate in the world. For a while, the name of the company was AOL Time Warner; however, the merger never achieved the desired goals, and AOL was spun off in late 2009.

In the interim, AOL acquired Weblogs, Inc. in 2005, which included the Engadget tech blog. After the spin-off, in 2010, AOL added the competing TechCrunch blog and The Huffington Post news site the following year. In 2015, AOL was acquired by Verizon. See You've Got Mail, AIM, Alto Mail, online service and ANS. 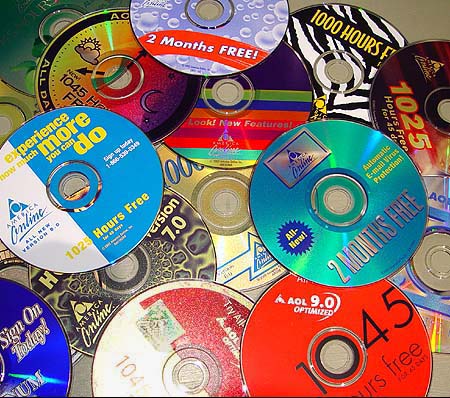 Perhaps the largest CD-ROM marketing campaign ever, AOL distributed millions of introductory offers to every venue imaginable after the Internet went commercial in the mid-1990s. New members signed up in record numbers. CD-ROMs were distributed with PCs, with software, virtually anything. They even wound up in dry-ice-frozen packages of filet mignons.