A family of wireless routers from Apple, introduced in 1999. In the past, Apple branded the Wi-Fi capability in its Mac laptops as AirPort. See wireless router.

AirPort Extreme
The larger AirPort Extreme is a traditional wireless router with three wired Ethernet ports for computers. Its single USB port can be used to connect a printer or external hard drive.

AirPort Express
Introduced in 2004, the smaller AirPort Express has only one wired Ethernet port. The AirPort's AirPlay feature streams music wireless from iTunes in a computer or from any iOS device to powered speakers or a stereo amplifier connected to the unit. In conjunction with the primary wireless router in the home, the Express can also be used as a Wi-Fi range extender and boost the signal over a longer distance. See AirPlay, Time Capsule, digital media hub and iTunes. 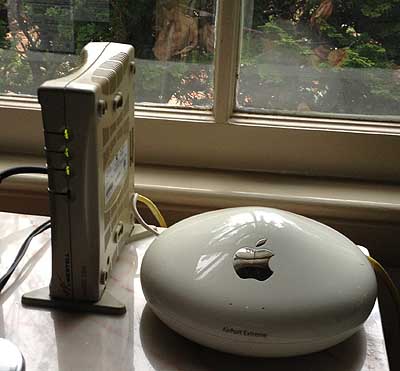 Looking like a space pod, earlier AirPorts did not resemble any other wireless routers. Connected to a DSL modem, in 2013, this AirPort was going strong after seven years of service.