(2) A broadcast TV streaming service via the Internet, founded by Chet Kanojia. Including DVR storage in the cloud, the content could be viewed in a Web browser, iOS device or on a TV via Apple TV and AirPlay or a Roku set-top box.

Aereo picked up the digital TV signals over the air from the major TV networks via a tiny, individual antenna for each subscriber and converted them to IP packets for transmission over the Internet. Hundreds of thousands of the tiny antennas were packed into a small space. Having started in New York in 2012, by 2014 Aereo was in 10 cities with 16 more planned.

Controversial and Then Bankruptcy
Just as the MP3 format revolutionized the music world, the Aereo concept might have transformed the TV industry. However, Aereo was sued by the major TV networks to stop transmitting unless it paid them fees as do the cable and satellite TV companies. With three court decisions in Aereo's favor in 2012 and 2013, the company continued until mid-2014 when the Supreme Court ruled against it, and Aereo suspended service. In November 2014, Aereo filed for bankruptcy. 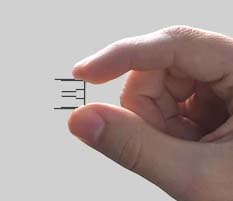 Aereo maintained its service was legal, because each of these antennas served only one subscriber, who had to reside within the geographic area an over-the-air TV antenna would pick up. (Image courtesy of Aereo, Inc.)