(Accelerated Graphics Port) An earlier hardware interface from Intel for connecting a graphics card (display adapter) to a PC. Introduced in 1997 and superseded by PCI Express in the late 2000s, a single AGP slot on the motherboard provided a direct connection between the card and memory. AGP was introduced as a higher-speed alternative to PCI, and it freed up a PCI slot for another peripheral device.

The brown AGP receptacle sat about an inch farther back from the PCI slots. There was only one AGP slot on the motherboard for the graphics card. 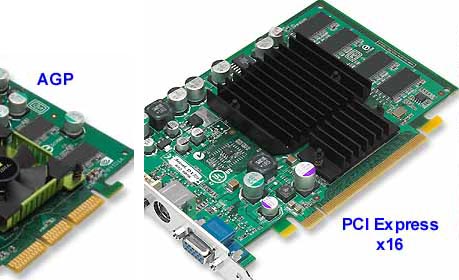 The 32-bit AGP bus gave way to 16-channel PCI Express (PCIe). For a while, motherboards had one PCIe slot just for the graphics card. Later on, boards offered multiple PCIe slots.