(Atanasoff-Berry Computer) The first electronic digital computer. Completed in 1942 by Iowa State Professor John Atanasoff and graduate student Clifford Berry, it employed many of the principles of future computers. For example, although physically in the form of rotating drums, its memory used capacitors that were constantly being recharged like today's dynamic RAM (see DRAM).

The ABC used a standard IBM card reader for input and an odometer-like device for output. For interim storage, Atanasoff devised a binary punch and reader that could very quickly store 1,500 bits on paper sheets by electrostatically burning holes in them. The ABC could solve 29 linear equations with 29 unknowns in one 24-hour day, a marvel for its time.

It Took Years for Recognition
John Mauchly, cobuilder of the ENIAC, began corresponding with Atanasoff in 1940 and visited him in 1941. Although Eckert and Mauchly's machine gained international attention, Atanasoff was not recognized until years later. A 1973 court overturned an ENIAC patent, stating that the basic ideas of the modern computer came from Atanasoff. Some 17 years later at the age of 87, he was finally honored by receiving the National Medal of Technology.

In 1994, an Iowa State University team started building a replica of the ABC. It took three years to complete, but worked exactly as it was supposed to. 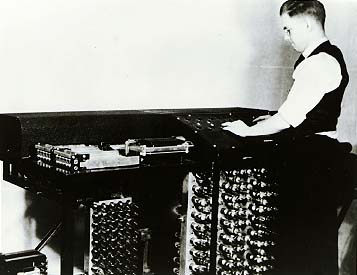 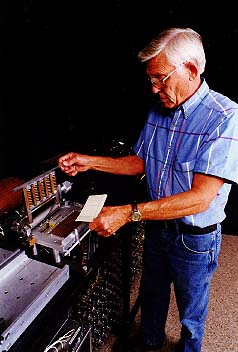 Clifford Berry (top) stands at the original ABC, circa 1942, while John Erickson, reconstruciton team member (bottom), puts a card into the replica that he helped build more than a half century later. (Images courtesy of Iowa State University.)

This shows all the components of the ABC machine. (Image courtesy of Iowa State University.)