(Audio/Video receiver) A combination audio amplifier and audio/video switching device for a home theater. An A/V receiver contains inputs for all the user's audio and video sources such as a cable TV box, Blu-ray or CD player and digital media hub (Apple TV, Roku, etc.). The receiver's video output goes to the TV via HDMI, and its several audio outputs connect to speakers and a subwoofer using stranded wires. See HDMI and speaker wires.

Receivers Have Amplifiers
Although an A/V receiver has its own amplifiers for powering the speakers, it generally provides optional outputs to external audio amplifiers if more speaker power is required. In such a case, the receiver functions as a preamplifier (see preamp). See home theater, stereo receiver, digital media hub and digital media server. 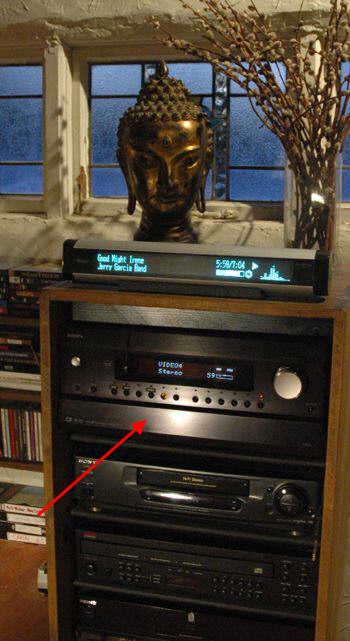 The A/V receiver (red arrow) switches between all the audio and video sources in this home theater. It also powers the speakers in the living room and provides outputs to an amplifier for another room. Many A/V receivers can power two or three zones without the need of a separate amplifier.