A TV set with a screen resolution of 3,840 horizontal and 2,160 vertical pixels (2160p). Advertised as 4K Ultra HD, most TVs are 4K today. With four times as many pixels as HDTV (1080p), 4K TVs use algorithms to "fill in the blanks" when displaying content lower than 4K, which is most of the time.

Native 4K Content Makes a Difference
Movies shot with 4K cameras always look best on a 4K TV. However, today's TVs are so sophisticated that many people find little difference between native 4K and upscaled 1080p (2K) content. The recording quality of the movie also has a lot to do with it.

When 4K TVs emerged in 2012, Sony offered a few 4K feature films on a hard disk player for its 84" TVs and later offered a paid download service. In 2018, cable and satellite providers began to offer 4K set-top boxes but content is limited. 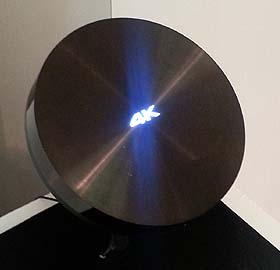 In 2013, Sony introduced the Video Unlimited 4K online store and media player. Ten inches in diameter with USB and SD card slots, its hard drive came preloaded with 10 feature films. The FMP-X1 was superseded by the FMP-X10 housed in a regular case.